Falken is a Japanese brand of passenger car, SUVs, light and medium truck tyres owned by the Sumitomo Rubber Industries and launched in 1983. It now focuses on producing Ultra-High-Performance products by using their heavy involvement in motorsports to help develop and improve its tyres for distribution.

Find Falken tyres in your size

Falken Tyres is heavily involved in a wide range of motorsport events including the challenging 24 hour Nurburgring race, rally racing and more. The Falken Motorsports team began in 1985, just two years after the brand began. Falken participates, so it becomes the brand known for creating winning tyres for race cars. Motorsports is also the best venue to develop new technologies and innovations used in its tyre designs.

Falken Tyres not only has tyres available for specific vehicle types like sedans and SUVs but also for particular seasons and terrains. These include all-season, summer and winter tyres, as well as all-terrain tyres. However, Falken's offerings are fewer vs other brands, choosing to produce specially designed tyres that satisfy a few choice consumer groups within its various target markets. Each tyre is full of features that meet the demands of different terrains and climates.

Falken Tyres guarantees that each tyre is of the highest quality to respect the customer's demands for flawless tyre. The company developed and perfected a manufacturing technique called the Neo-T01. It is a production process entirely computer-controlled making manufacturing more precise and an exact match to its design.

Are Falken tyres worth the price?

Falken Tyres have various design elements built-in that improve the overall handling of the vehicle to increase driver confidence and safety. These include a sturdy centre rib which decreases wheel spin when accelerating and a wide shoulder block design that allows for quick and responsive motorsports type cornering. The high-tension build characteristics of each tyre also make the vehicle more stable, whatever the speed, for precise and consistent control.

Falken Tyres has a unique innovation incorporated into its designs that eliminates tyre noise output to ensure a comfortable ride. Its engineers developed the unique Silent Core technology, which makes the tyre cavity resonate more with every roll on the ground, minimising noise. A polyurethane foam layer buffers and blankets the inside tread. This 'soundproofing' measure does not affect tyre performance but reduces tyre noise produced by 10 decibels. 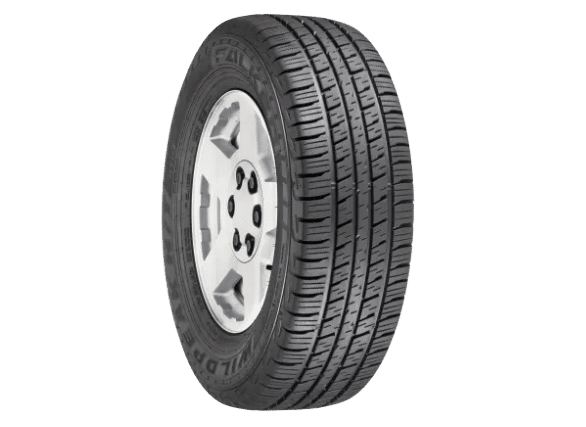 Buy the right Falken tyre for your vehicle

Falken Tyres In the News

Falken Tyres is again supporting top-class European football by partnering with 17 clubs in seven countries including Germany, England, Spain, Italy, Poland and more. These clubs include Liverpool FC in England, FC Schalke 04 in Germany, FC Bologna and FC Turin Italy, Seville FC in Spain and Poland's Legia Warsaw among many others.

FALKEN is OEM for 2019 Toyota Corolla

Falken Tyres is pleased to announce that it is the chosen OEM tires for the new Toyota Corolla models, available from March 2019. The new vehicles will use the ZIEX ZE914B ECORUN from Falken’s ZIEX Series, and the SINCERA SN832B from the Japanese tyre manufacturer’s SINCERA Series.

FALKEN is OEM for 2020 Jeep Gladiator

Falken's Wildpeak AT AT3W tyre has been chosen to be the original equipment on the 2020 Jeep Gladiator truck. This will be the standard fitment available, with the Wildpeak MT variant as an option. The Tread design and silica compound enable the AT3W to excel in treadwear, winter and wet performance.

BFGoodrich is a reputable name in the tyre manufacturing industry. As a subsidiary of tyre giant Michelin, iBFGoodrich is credited for its tyre inventions, dedication to motor racing grassroots and commitment to customer satisfaction

Kumho Tyres manufactures affordable, quality tyres for a range of vehicles. The tyre maker has partnered with 3 of the worlds top car brands as their OEM, and is renowned for its commitment to grassroots motorsports.

Toyo is a Japanese powerhouse in tyre manufacturing. It makes some of the most coveted high-performance tyres for a range of vehicles including sedans, SUVs, and trucks.